EyeFitU hit the front rows (and the streets) to report on the menswear trends to watch.

First up, London, where our highlights included design duo Casey-Hayford. Their show was an eclectic fusion of the musical genres of their respective generations, presenting references from 1970s rock alongside the style adopted by the grime music scene in the 2000s. Oversized, urban silhouettes splattered in bleach marks sat apart from tie-dye, ikat embroideries, silk jacquards and elaborate jewellery. The result? A collection sparked with an artisanal feel without losing its street edge.

Elsewhere, Lou Dalton created a modern urban uniform by reimagining lightweight hiking staples. All-over floral prints and light baja stripes cemented this collection in the resortwear category; meanwhile, merino sweaters and high-gloss outerwear added a luxury edge. Activewear-inspired baseball shirts and sweatpants were also present, lending an urban undertone. For a look straight off the catwalk, be sure to check out Adidas and Nike on EyeFitU and mix traditional sportswear with a bomber jacket or cargo shorts updated in a punchy colour palette.

Fashion’s favourite, JW Anderson, captivated the audience with a collection inspired by the fairytale Le Petit Prince. The childlike theme was emphasised with an epic play of proportions proving exaggerated, oversized looks are in. Bombers, trench coats and tailoring were covered with the designer’s signature off-kilter handwriting. Get the look for less with motif pieces from Topman and Gap on EyeFitU.

Crisp, sporty silhouettes were showcased by Christopher Kane, who explored the sensation of fear (inspired by his experiences of growing up surrounded by tension between football hooligans and the police). This translated into painted graphics on jackets and ‘prison-inspired’ smocks. His homespun gingham checks are also a print trend to look out for in the coming months.

Gucci presented in Milan and EyeFitU loved the sensory overload of eccentric silhouettes, styling and colour. Again, a sporting element was added with shorts, hoodies and trousers with boxer and baseball references. Previous hits such as embroidered souvenir jackets and graphic T-shirts and knits were celebrated once again. 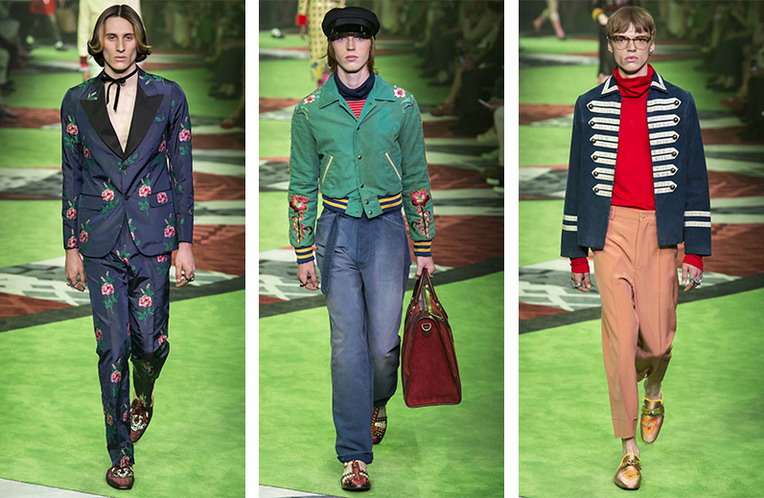 The sporty trend was also referenced at Marni, with staples such as shorts and overcoats elevated in supple leathers. A sense of travel-ready utility was conveyed, plus a subversive twist on tailoring presented with design details from cutouts to Velcro straps fusing function and form.

What trends will you be buying into this year?