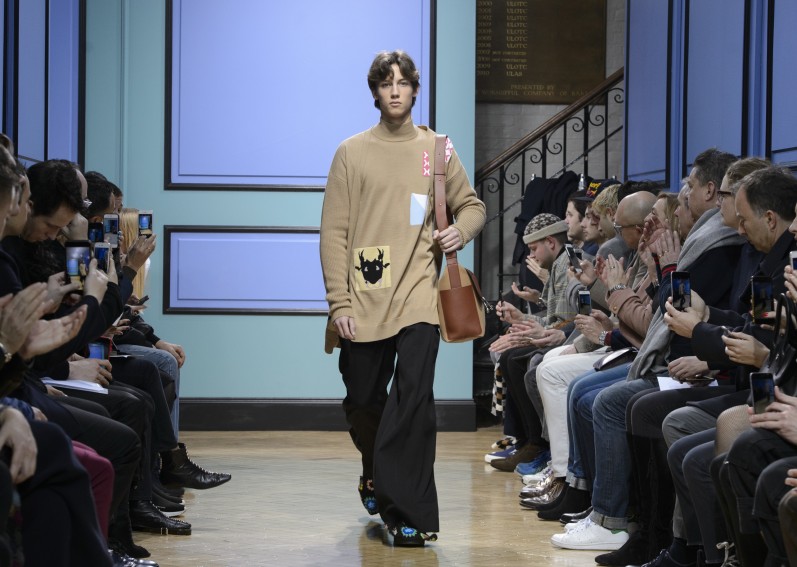 Join us as we reveal the biggest trends in menswear right now. Want to know what you’ll be wearing next season? Let’s start with the top looks from London Collections: Men. 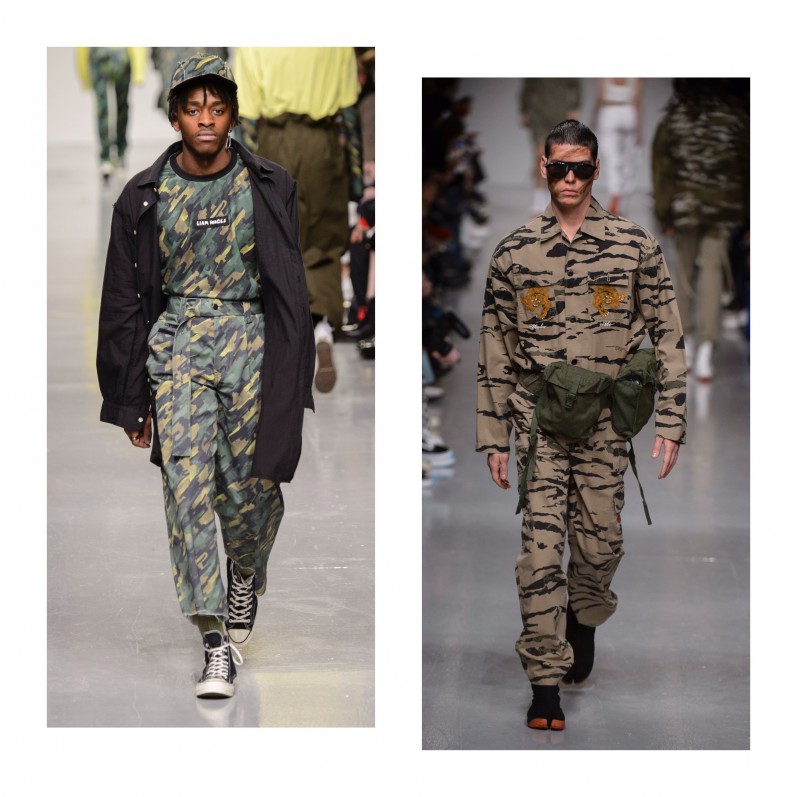 Natural camouflage hits the catwalk for AW17/18, dominating yet another season. This time it comes with a tough military twist. The update takes inspiration from mineral and organic patterns showing that the desire to reconnect with nature prevails. Striking head-to-toe looks were shown off at Maharishi and Liam Hodges. 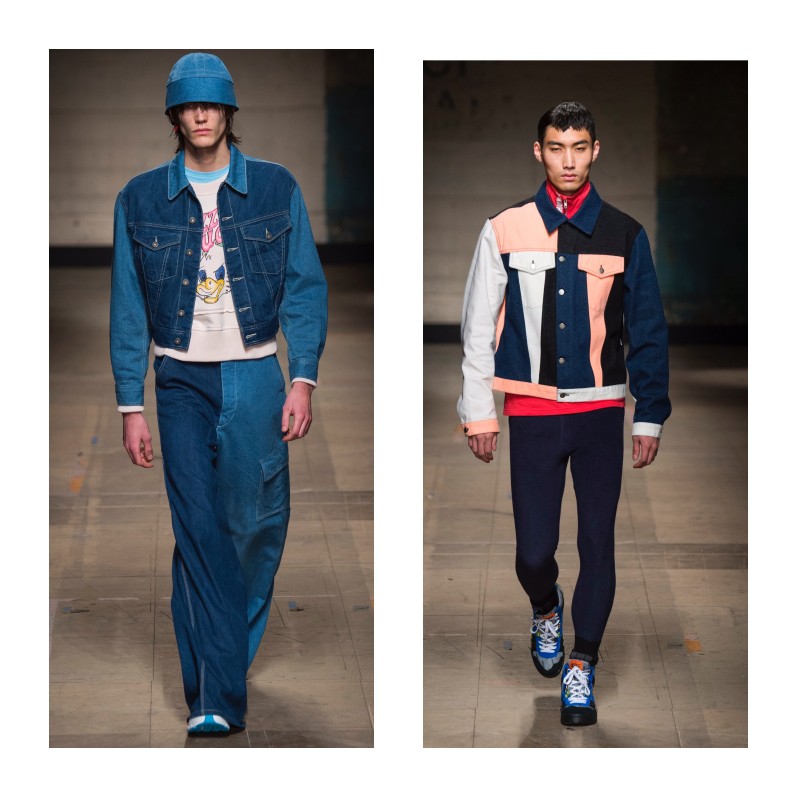 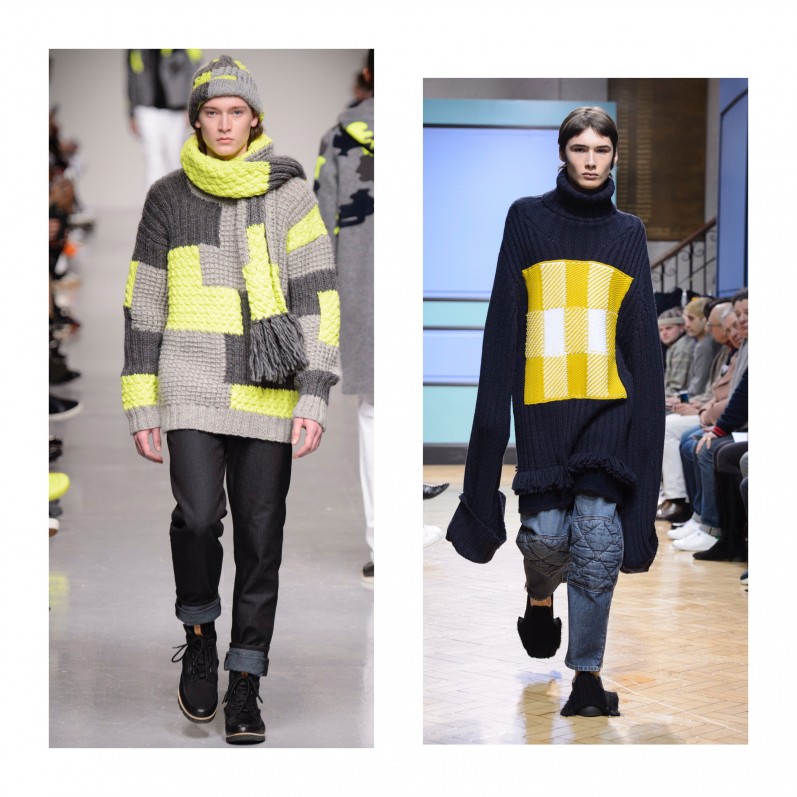 As seen at JW Anderson, the directional young men’s market is celebrating graphic patchwork – where street fashion meets craft. Traditional patchwork takes on a new look in yellow, white and orange, then paired with muted browns and greys for unusual contrasts. Blocky patterns of stripes and checks were admired on oversized silhouettes in chunky wool blends. 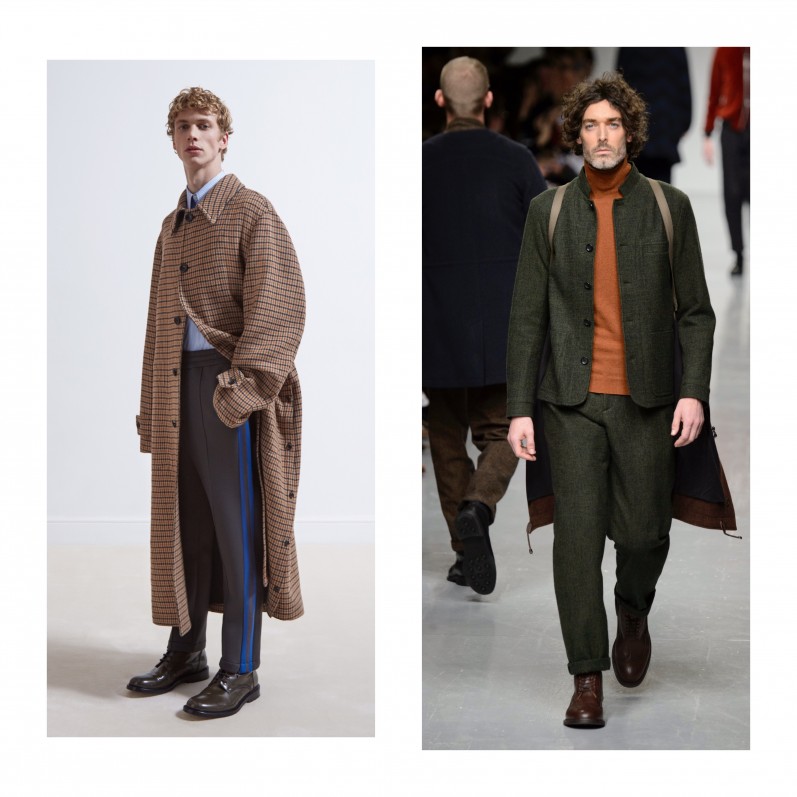 Once more exhibiting its versatility, tweed delivers for AW17/18 menswear. Take note of the Joseph show and the mix of tradition with a contemporary execution. The grainy texture on staple winter surfaces, from military looks to smart coats, was spotted in a variety of silhouettes. Look out for the town-and-country dogtooth check too. 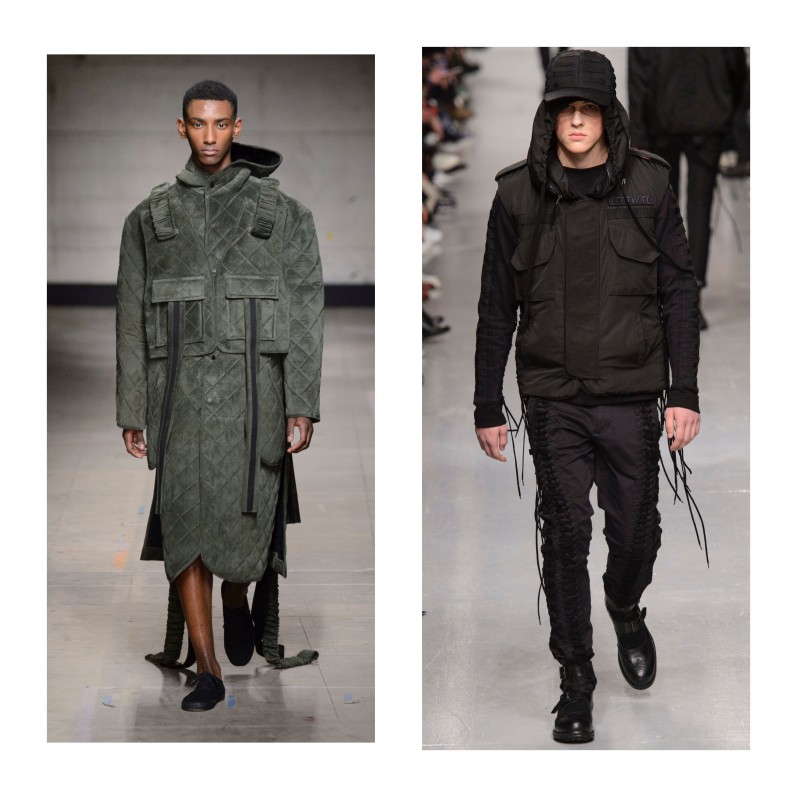 There’s a new theme in town with standard issue inspired clothing given a directional aesthetic. Craig Green and KTZ adorn staple items with exaggerated lace details or present them in unexpected washed silks and oversized proportions. Military references were also popular with pieces amplified thanks to extra pockets, straps, zippers and patchwork elements. 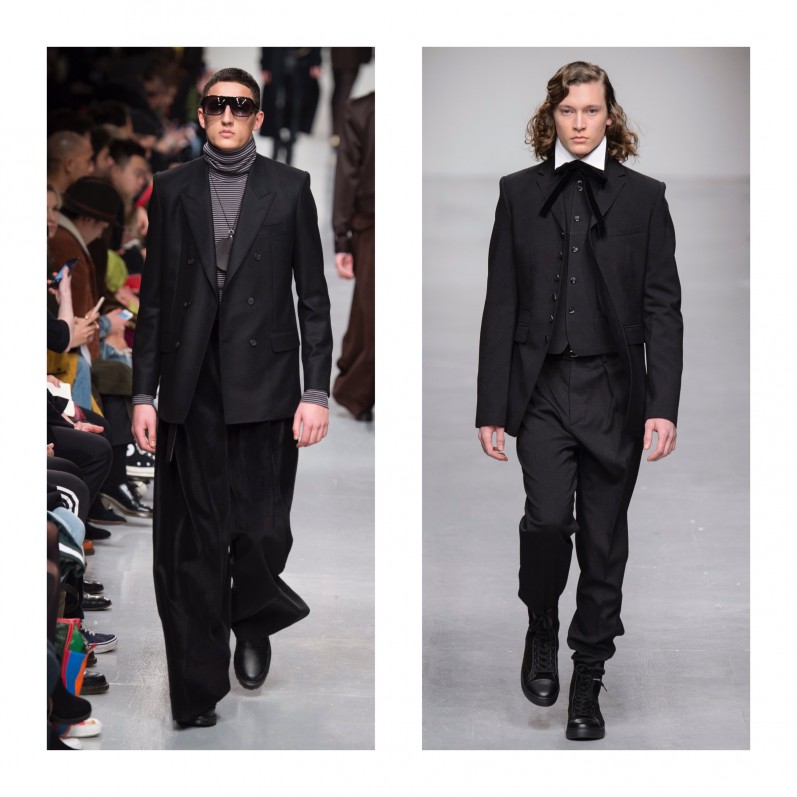 A smarter trend landed as classic sartorial tendencies took on a darker mood. Designers focused on a smart punk toughness via lace details and straps, with others channelling a neo-Victorian edge. Versatile wools were sensible against upscale velvets that screamed opulence. Cementing the look were creeper shoes, heavy boots and chunky soled Oxfords to reinforce the anti-formal message through the styling. 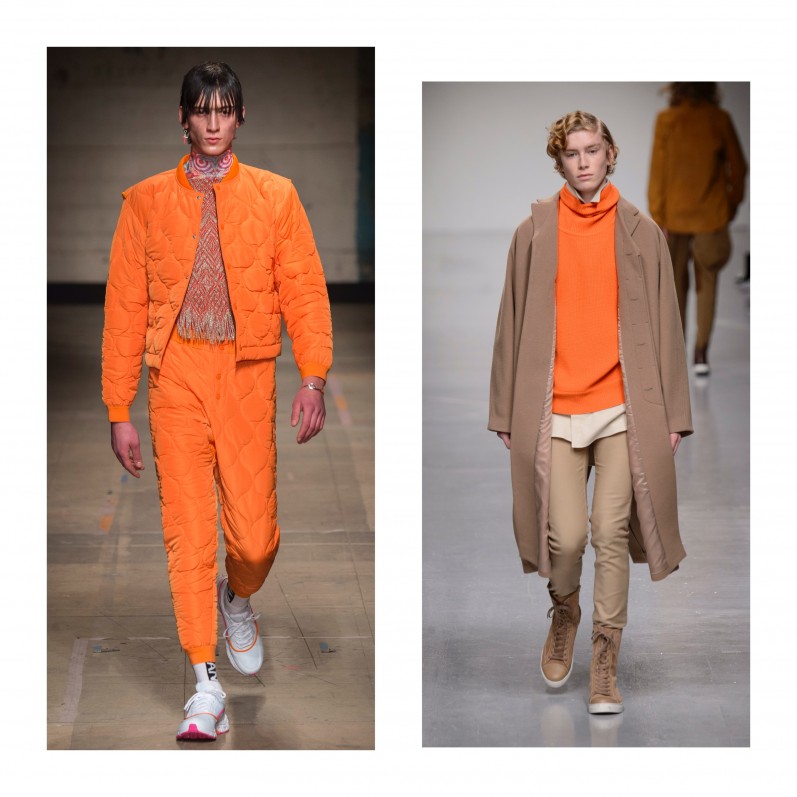 Onto the colour trends and we were happy to see bold orange as a prevalent statement bright, even for the colder seasons. John Smedley, Songzio and JW Anderson reinforced its wearability on knitwear that ranged from textural, marled crew necks, mock necks and fringed cardigans cut oversized. Quilted coordinates channelled the orange lining of a classic bomber jacket at Topman Design. 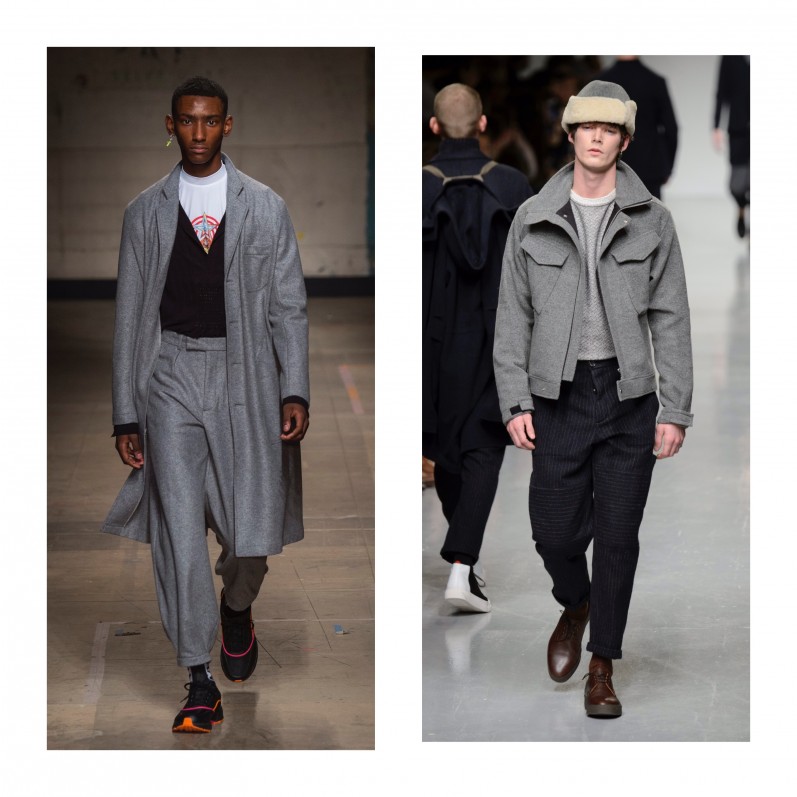 Secondly, steel grey made waves on the menswear catwalks (also presented at Topman Design). The tone is lighter than charcoal but just as versatile with a modern appeal. Nylon bombers and tweedy wools were updated in the hue, whilst it lent a futuristic edge to technical materials.

What’s taking your fancy from LCM for next season?